Just before we watched Sherlock Holmes, we decided to grab a quick dinner at Sui Sha Ya. I think the only striking thing about the place is its signage and ambience when you enter the it, makes you think you’re going to an expensive sushi place, which it actually is compared to others I’ve been to, but not really as good at all. 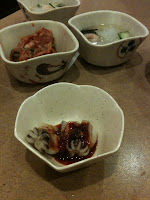 It was a lot, and yes there were only two of us to finish all those. I have tried a lot of AYCE sushi places and several other Japanese restaurants here but I haven’t really been to one that is owned by a Japanese. It’s usually owned by Koreans or Chinese, not that I’m complaining but wouldn’t it be more authentic if food from a certain country is actually served by people from that same region? 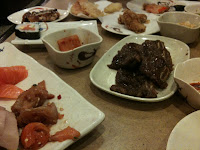 Anyway, nothing from the dish really stood out, I’m not sure if we should have tried one of each item on the menu but that would have been food coma and we would be falling asleep on the movie house. One thing I noticed though was that the unagi was actually twice as long as the rice ball and not as sweet as it is on other sushi places – which works for me. They were also generous with their grilled short ribs servings, one of my favorites.

Verdict:
N: 2.0/5.0 [-3 because sushi is a dime a dozen in Vancouver and this one didn’t justify its hefty price tag]