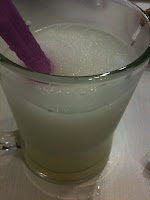 After carrying my stuff and moving them to storage, we decided to grab some snacks to replenish the *lost* energy. It was a toss between cinnabon and bubble tea, the latter emerged victorious. The new bubble tea place along Kingsway was seated right on a major intersection so it was hard to miss. It was cold and windy but I got the lychee slush with coconut jelly and we also tried the taro pancake.

The slush gave me brain freeze but it was so good. The taro pancake also turned out great. It was basically taro wrapped in batter and deep fried, so it’s crunchy on the outside but soft and sweet on the inside. Reminded me of deep fried Mars bars (deep fried what? that’s another story =)).