aka the restaurant that fried chicken wings built?
I’m not really a fried chicken wing connoisseur nor do I like fried food in general but when I heard about this place, I felt like I had to give it a visit.
Phnom Penh sits right at the heart of Vancouver’s Chinatown district. When coming from Waterfront skytrain station, you can either take a bus that passes through some dodgy spots in town or take skytrain to Main Street and walk a few blocks. The best time to visit is during off peak hours like after lunch time or just before the dinner crowd otherwise you’ll have to resign yourself to waiting in line, which is probably a sign of either bad seat management or really good food.. 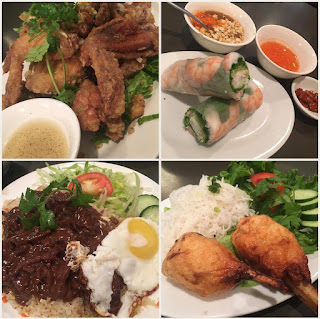 I visited this place twice and both times I ordered beef luclac with egg and the chicken wings, on my second visit I also tried the fried shrimp balls in sugarcane stick which was a rather forgettable dish and not really worth ordering again, and the fresh shrimp rolls which was also not a standout.
So how’s the chicken wings? Well it was crispy on the outside and quite tender inside that you don’t have to wrestle with it to pull the meat from the bones, it came with a few fried chilli peppers as well as a lemon juice and pepper dip which I didn’t really use that much because the wings were good on its own. Is it the best chicken wings in town? Before this I thought Tacofino had the best wings but I never usually order wings anyway so I can’t say for sure.. Phnom Penh does deliver though and is just not hype  in that category, the other dishes I ordered were not something to write home about though. The beef luclac with fried rice and egg was just ok, it’s comparable to beef tapsilog, a Filipino breakfast dish that’s so ubiquitous where I came from.
Overall, I would definitely give this place another visit just for the chicken wings alone and I’d probably try the pho dishes too next time when the rainy season is back.